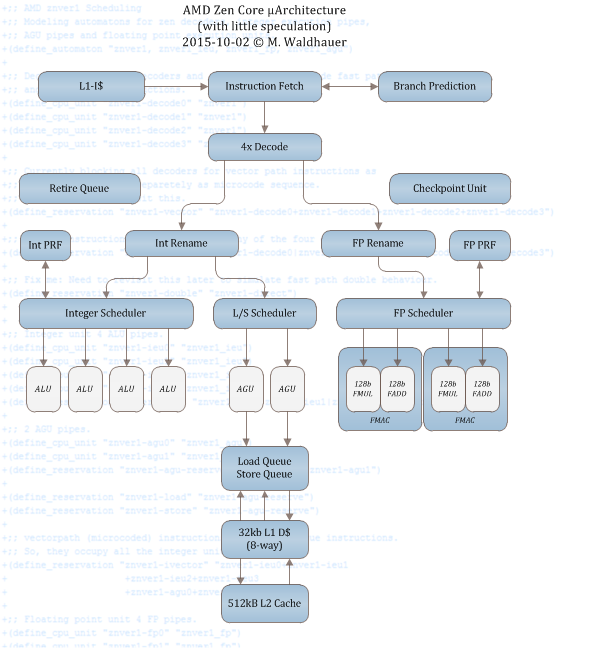 >
> If that is accurate my prediction [1] of the SIMD wide and FMA units
> was right, which implies Zen is a 16 FLOP arch, as I expected.

Though the 128-bit FPU's are one thing which Dresdenboy quessed without any better knowledge/any source. They may also be 256-bit.

> I also got right the total number of integer/mem pipes, but
> I had predicted 3ALU + 3AGU [1], instead 4ALU + 2AGU.
>
> Albeit I finally proposed a 3ALU+3AGU configuration for Zen, I asked David Kanter in this forum
> about the possibility of Zen using an 4ALU+2AGU configuration, when the Internet was full with
> the slides (those slides that latter I showed to be fake [2]). The discussion was:
>
>

> I have a question, I predicted 3ALU+3AGUs and the leaked diagram shows six integer
> > pipes. Do you believe a 4ALU+2AGU would be a better combination or not?
>
> 3 AGU + 3 ALU is a much better mix. Remember that x86 is load+op, so generally you want to sustain nearly
> a 1:1 ratio of memory to ALU operations. Haswell and Broadwell have extra ALUs to handle branches, etc.
>
> 2 AGUs + 4 ALUs would be rather disappointing and also at a severe disadvantage for HPC to Intel.


But we do not yet know the widths of the FPUs and the LSUs so hard to say anything about the FPU side.