By: Travis Downs (travis.downs.delete@this.gmail.com), February 22, 2021 11:40 pm
Room: Moderated Discussions
I recall reading several times was that one of the primary motivations for moving from a ring topology (used for everything Sandy Bridge up to Broadwell, and Skylake client) to a mesh (used in SKX and later server chips) was because the ring was a bandwidth limiter as the core counts increased (this was also the reason for the dual ring design on the high core count chips of later generations).

However, this paper directly compares the LLC bandwidth for Broadwell and Cascade Lake, and finds that in terms of absolute bandwidth per core and bandwidth scaling, Broadwell seems to do better, especially for reads (see 4.2 "L3 Scalability"): 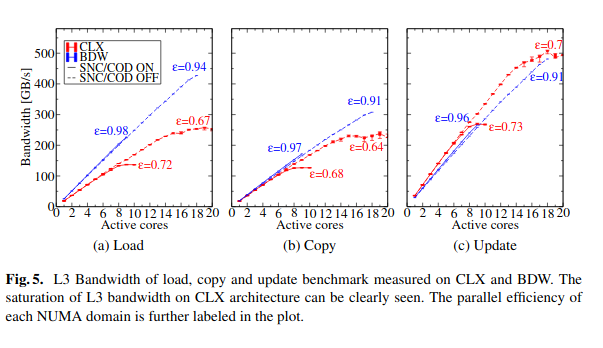 Note how CLX L3 bandwidth tails off fairly heavily at high core counts for each test.

CLX comes out looking mostly fine on the actual applications evaluated in the rest of the paper, especially due to might high memory bandwidth, but I was surprised to the see the primary purported benefit of the mesh not being at all evident here (the opposite, really).