Chart 1 below shows the results from profiling the active processes for both workloads (Cryostasis and Soft Body Physics). In each case, we kept the top 10 process, as measured by the percentage of instructions retired. Generally, the percentage of cycles is closely correlated with the instructions retired, but there is some slight variation. In each of the charts, we bolded the entries that were important and selected for further analysis. The right hand side of the chart contains the number of events observed during the experiment, while the left hand side contains percentages for each type of event observed during the experiment. For example, 90.9% of the floating point SSE uops observed during our experiment were executed from the Cryostasis process.

Similarly, the Soft Bodies demo is dominated by a single process which accounts for almost all instructions (97%) and cycles (87%). The SoftBodies.exe process is heavily weighted towards x87 instructions, which are 31% of all retired instructions, with few SSE floating point operations. Like Cryostasis, the IPC is pretty good, achieving 1.23, largely due to the structured nature of the underlying the physics code. The slight difference between the two probably reflects the additional code required for a game, rather than a simple screen demo. 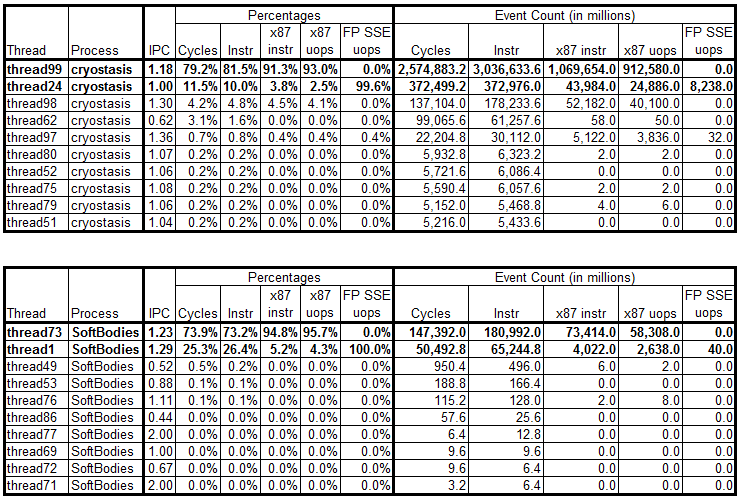 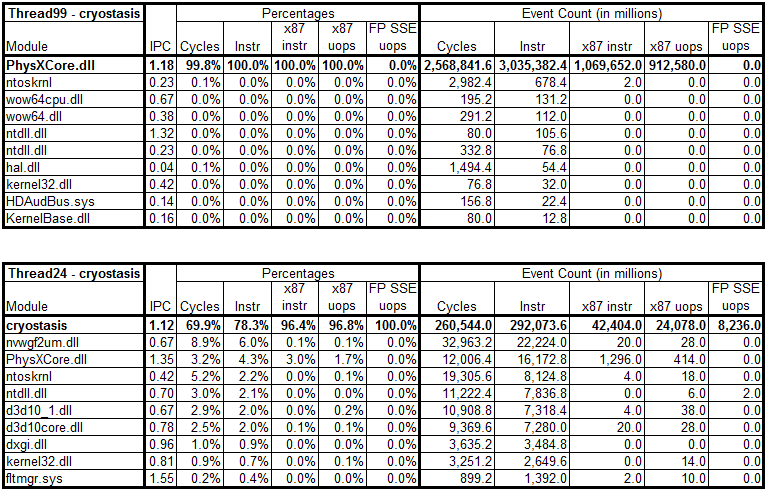 SoftBodies.exe has two principal component threads; thread71 is roughly 73% of the overall instructions retired and cycles, while thread1 is the remaining 26%. Thread71 is almost entirely composed of the PhysXCore.dll module. Again, this module does not use any SSE and instead relies on x87; an incredible 40% of the retired instructions are x87. Since the module dominates the process overall, it is not surprising that 95% of the x87 instructions retired in the process are found within this one module. The IPC for this module is similar to the IPC observed when executing cryostasis, a healthy 1.4, which helps to explain the overall IPC of the process.

Oddly enough neither workload is multithreaded in a meaningful way. In each case, one thread is doing 80-90% of the work, rather than being split evenly across two or four threads – or as is done in an Nvidia GPU, hundreds of threads. 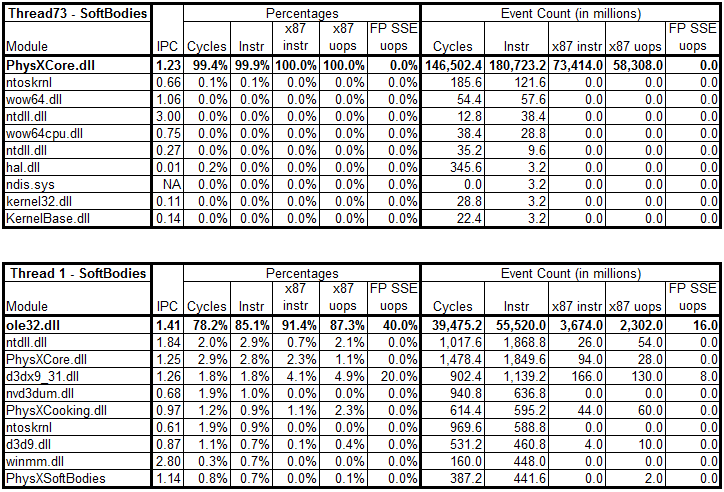 The second and smaller thread1 is primarily ole32.dll, which is a library used by Windows for OLE (Object Linking and Embedding). The ole32.dll module has a little x87 code, about 6% of instruction retired, but far less than the massive 40% found in PhysXCore.dll. It’s not quite clear what the library is actually doing, but it only contributes a little to the overall use of x87.

Overall, the results are somewhat surprising. In each case, the PhysX libraries are executing with an IPC>1, which is pretty good performance. But at the same time, there is a disturbing large amount of x87 code used in the PhysX libraries, and no SSE floating point code. Moreover, PhysX code is automatically multi-threaded on Nvidia GPUs by the PhysX and device drivers, whereas there is no automatic multi-threading for CPUs.